Be the first to review this product
Product code:
DLK200032
$69.95
Specifications
Backorder 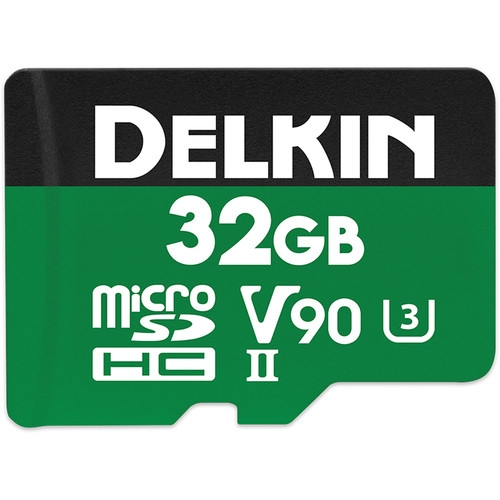 Designed for professional photographers and videographers, the 32GB POWER UHS-II microSDHC Memory Card from Delkin Devices features a storage capacity of 32GB and takes advantage of the UHS-II bus to support maximum read speeds of 300 MB/s and maximum write speeds of 250 MB/s. This card has also been designed with the V90 Video Speed Class rating, which guarantees minimum write speeds of at least 90 MB/s. All of this allows for users to capture 8K, 4K, 3D, HDR, high-speed and high-frame-rate recordings, and multiple video streams created by 360° cameras. It also supports data-intensive simultaneous captures, such as raw and JPEG, as well as video, still, GPS data, and time-lapse.

Built for extreme conditions, Delkin's 32GB POWER UHS-II microSDHC Memory Card is protected against water, shock, and x-rays, and also features built-in error correction and wear leveling. Included is a UHS-II microSD to SD adapter, allowing this card to be used in SD-compatible devices, as well as a protective storage case.