Be the first to review this product
Product code:
SON0396
$548.00
Specifications
Backorder 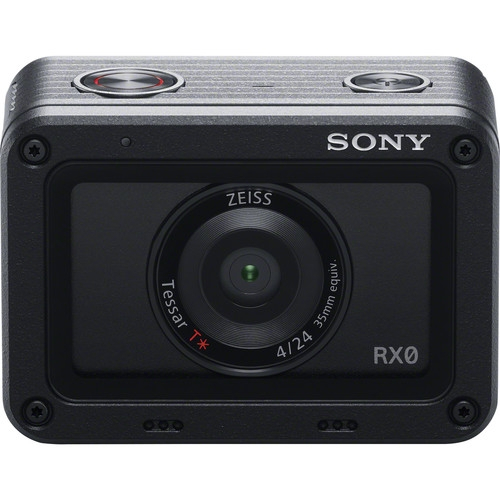 The lightweight Sony RX0 Ultra-Compact Waterproof/Shockproof Camera offers professional image quality in an action camera-sized form factor. Capable of outputting uncompressed UHD 4K video, it also records up to 1080p60 in-camera at 50 Mb/s in XAVC. A Zeiss 24mm-equivalent f/4.0 lens provides a wide, undistorted field of view. Its 21MP 1" stacked Exmor RS CMOS sensor produces minimal rolling shutter artifacts and is protected by the RX0's waterproof, crushproof, and shockproof body. Use the versatile, diminutive RX0 as a single camera that fits almost anywhere, or for multicamera recording with timecode sync for up to five cameras. When connected to a Wi-Fi router, greater than five cameras can be synced, suiting the RX0 for concerts, stunts, and other multicamera applications. Camera control is offered via the Sony Play Memories smartphone app for iOS and Android.

A 1" Exmor RS CMOS sensor provides extended dynamic range and high-speed readout, even at super slow-motion rates up to 960/1000 fps. This anti-distortion shutter features speeds up to 1/32000 per second, capable of freezing the action with minimal skew. Customize your image capture with multiple picture profiles including the versatile S-Log2 gamma setting.

Internal recording options include 24/25/30/50 and 60 fps at 1080p, all at 50 Mb/s in the XAVC codec. Still photos can be captured in both raw and JPEG with shutter speeds as fast as 1/32,000 per second, and in continuous-shooting bursts up to 16 fps. Uncompressed UHD 4K video is output via HDMI for capture to external recorders. The Sony RX0's additional pro-style features include manual- and auto-focus modes, a 20" minimum focus distance, S-Log2 recording, NTSC and PAL compatibility, and on-camera control buttons.

The Sony RX0 includes a rechargeable NP-BJ1 battery, an AC adapter, a micro-USB cable, and a wrist strap. The camera is waterproof down to 33' and can be used down to 330' with the optional MPK-HSR1 waterproof housing (available separately). The durable RX0 camera is also shockproof from impacts up to 6.5', and crushproof under weights up to 440 pounds.